Greater Warsaw communes and districts made an appeal to the Government to supplement the draft National Development Strategy in terms of supporting the development of voivodeship cities and their functional areas.

“As local government officials from Greater Warsaw, we want to cooperate and take joint responsibility for the development of our region. We are appealing for taking the position of local government bodies into consideration in programming and managing development processes,” said Rafał Trzaskowski, Mayor of Warsaw, and added, “Developed metropolitan areas contribute to the high investment appeal of the respective regions and the country as a whole.”

For months Warsaw has for many months now called for taking the position of local government bodies into consideration in programming the future financial perspective of the European Union for 2021-2027 and preparing the National Regional Development Strategy 2030 (NRDS). The suggested model envisages the centralisation of decisions concerning the development of the respective cities and regions. Metropolises are the major service, innovation, science, and culture centres in the country.

Large cities generate revenue which can be used for the development of peripheral and marginalised areas. Well-developed metropolitan areas contribute to the high investment appeal and attractiveness for settlement of the specific regions and the whole country, improving the position of Poland at the international level.

On 24 April. during the 21st session of the Steering Committee of Integrated Territorial Investments of the Warsaw Functional Area, the representatives of Greater Warsaw signed a position statement opposing the discrimination of the largest cities in a document of key importance for the development of the respective regions and metropolitan areas.

“The major points that are missing are first of all the lack of emphasis on the role of the metropolis. For instance, there is no information on the government’s strategy for the distribution of traffic within metropolitan areas. It is not enough to provide transport corridors between large cities, but it should be considered how railway and road users move around metropolises,” said Michał Olszewski, Deputy Mayor of Warsaw.

The Greater Warsaw commune and district officials unanimously concluded that the current Strategy can have negative consequences. Neglecting measures which support the competitiveness of large Polish cities and their metropolitan areas can reduce access to educational, health, cultural, sports and transport services. In extreme cases, the investment appeal of the respective regions and the whole country may suffer, contributing to young people’s economic emigration. Furthermore, the provisions proposed by the Polish Government may weaken the position of all Polish metropolises in the globalising economy.

In the current multiannual EU budget, a special pool of funds was allocated for Integrated Territorial Investments, which the local government bodies of Greater Warsaw are eagerly using for developing aspects important for the residents, such as public transport, education, and economic development. These funds enable closer cooperation between the capital city and Greater Warsaw’s communes utilising their potential and assets to the fullest. As part of the Integrated Territorial Investments in Greater Warsaw, local authorities have signed agreements for EU funding worth over PLN 590 million. This money will help i.a. provide additional places in nursery schools, bike paths and P&R facilities.

Greater Warsaw has an action plan

The City of Warsaw is ready to take up the role of the leader of the Warsaw capital region. The strategic action plan for Greater Warsaw adopted in the previous year defines the priority development goals. These are to develop a smart integrated collecting transport and roads network, to create a green metropolis, to provide attractive ways of spending free time, to create conditions for business development and investment, and to provide state-of-the-art social services. The main proposed types of projects include local urban mobility projects (bike paths, P&R), a package of educational measures, improvement of air quality, and revitalisation activities.

This document reflects the outcome of six-month-long workshop activities attended by representatives of several dozen communes and counties situated within the Warsaw Metropolis. By referring to the binding strategic documents, Strategic Guidebook 2.0 sets major strategic intervention directions for the Warsaw Metropolis. Establishing a Metropolis in balance, i.e. a metropolitan region capable of efficiently facing four horizontal challenges, which include ensuring good-quality infrastructure, safety, education and metropolitan coordination, forms the leading motive encountered within all directions of activities that have been discussed.

Meet the protagonists of our newest film – Greater Warsaw residents – and find out about their experiences related to their daily contact with the outcomes of investment funded under the ITI.

Local government bodies of Greater Warsaw speak with one voice when it comes to programming EU funds available within the EU cohesion policy in the 2020+ financial perspective. Warsaw and its neighbouring communes and district signed a cooperation declaration and are working intensively on a common strategic plan.

EU funds in the 2020+ financial perspective will include the new division of the Mazowieckie Voivodeship into two statistical units. The City of Warsaw, 69 communes and 9 districts (Grodzisk Mazowiecki, Legionowo, Mińsk Mazowiecki, Nowy Dwór Mazowiecki, Otwock, Piaseczno, Pruszków, West Warsaw, and Wołomin) comprising the “Warsaw Capital” region are building the potential and developing growth priorities to present a common position in the negotiations of the 2020+ EU budget. 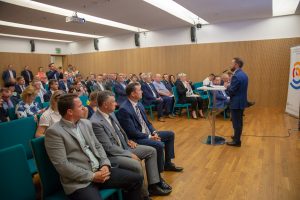 in terms of cooperation for inclusive and sustainable socio-economic growth of the Warsaw Metropolitan Area”, which provides for a territorial and thematic extension of cooperation between communes and districts. Let us recall that since 2014 Greater Warsaw has operated on the basis of the agreement referring to Integrated Territorial Investments which covered 40 local government bodies, forming ground for investments expanding the metropolitan system of bike paths and P&R facilities, educational projects and increasing the availability of public e-services.

“We are ready to undertake initiatives and measures for the socio-economic development of a territorially expanded Greater Warsaw. This unity expressed in the form of a document gives us strength for joint impact on programming EU funds for Greater Warsaw available in the EU cohesion policy in the 2020+ financial perspective,” said Michał Olszewski, Deputy Mayor of Warsaw, and added, “We already know that the ongoing budget negotiations will be particularly difficult for countries from our region, so as a metropolis we would like to prepare for that and speak with one voice about our needs.

Local government officials spent the first half of 2018 on intensive work on the preparation of “The strategic action plan for Greater Warsaw in the context of programming and implementing the cohesion policy after 2020.” The document will specify the common courses of action for Greater Warsaw within the new territorial borders. The main tool for their development was a series of strategic workshops for communes and districts conducted by experts from the University of Warsaw. Currently work on the collected research material is underway.

More information in the VIDEO material: