Warsaw hosts the participants in the Eurocities seminar. Representatives of European cities discussed the benefits of metropolitan cooperation.

On Wednesday 12 December the participants met in the ZODIAK Warsaw Pavilion of Architecture, opened two weeks ago. This location is not accidental, it is a space for discussing Warsaw’s economic potential, and first of all its impact on the future and development of our city.

Representatives of European cities discussed ways of effective cooperation and how EU regulations related to the cohesion policy are supporting this objective now and beyond 2020. Warsaw and the neighbouring communes shared the history of their cooperation for a better, more comfortable life of their residents.

“For us, Integrated Territorial Investments are something more than a way of obtaining EU funds. They are certainly an important incentive for joint actions, but the major success of Warsaw’s ITI lies in developing mutual relations and trust, and developing good cooperation practices between local government bodies. We have found out that together it is easier to find constructive solutions to the problems we are facing. We are a group of local government bodies no longer, we have become a metropolis,” said Michał Olszewski, Deputy Mayor of Warsaw. 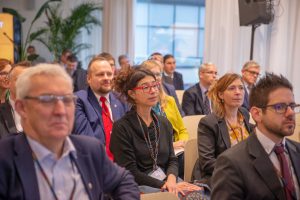 The participants are not only exchanging experiences to help cities develop metropolitan strategies for the next budget perspective. Among the discussed subjects are also ways of presenting convincing arguments to central authorities to receive clear support for cooperation between communes through the cohesion policy.

The organisation associates more than 140 largest European cities. Its major goal is cooperation between cities leading to an improvement in the quality of life of their residents. The focus is both on economic and social development as well as on support for local government structures. Warsaw joined the organisation in 2002. Greater Warsaw works for the residents

Investments of Warsaw and communes around Warsaw are implemented, i.a., thanks to European funds under the 2014-2020 Mazowieckie Voivodeship Regional Operational Programme as part of the Integrated Territorial Investments instrument. This special pool of European money helps local governments of Greater Warsaw shape vital aspects of life, such as public transport, education, and economic development. These funds enable closer cooperation between Warsaw and the agglomeration’s communes utilising their potential and assets to the fullest. Since 2014 Warsaw and 39 nearby communes have been actively cooperating and effectively spending EU funds on integrated investments for residents. As part of the Integrated Territorial Investments in Greater Warsaw, local authorities have signed agreements for EU funding worth over PLN 550 million. This money will help i.a. provide additional places in nursery schools, bike paths and P&R facilities.

More about the development of Greater Warsaw  here.