Greater Warsaw is not slowing down: our goal is to remain the fastest developing region in Europe

09 Nov 2017 | Przemysław Chwiszczuk
Greater Warsaw is not slowing down: our goal is to remain the fastest developing region in Europe

Mayors, village governors, and representatives of town, commune and district council co-creating the Warsaw Metropolitan Area gathered at POLIN Museum of the History of Polish Jews to discuss the cooperation so far, the successes, and challenges for the future. The basis for the future cooperation under Greater Warsaw 2.0 will be the expansion of the range of joint actions and of their reach. 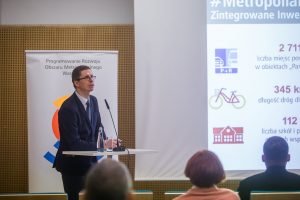 “The division of the Mazowieckie Voivodeship into two separate NUTS 2 statistical units to be introduced on 1 January 2018 will be an opportunity for us to expand the sphere of impact of the metropolis and to include further local government bodies in our measures. We are convinced that the experience gained so far during our cooperation will enable us to create an excellent basis for integration mechanisms in the 2020+ perspective,” said Maciej Fijałkowski, Director of the European Funds and Development Policy Department. We must jointly specify development goals, flagship projects, cooperation framework, and action coordination measures,” he added.

It was emphasised at the meeting that creating common initiatives requires, and will continue to require Greater Warsaw local government bodies to make compromises for the common good. One of the most important aspects of these initiatives is treating the success of the entire Greater Warsaw as achieved thanks to the efforts of each commune encompassed within this area.

#GreaterWarsawWorks “According to the data for the last 10 years published by the EU, Warsaw along with the Greater Warsaw area is the fastest developing region in Europe. In the last decade, when Prague recorded a 12% GDP growth, and Budapest’s growth was at 18%, Warsaw reached a 57% growth. Such dynamic growth would not be possible if it was not for the active involvement of local government bodies co-creating Greater Warsaw in integrated measures and undertakings. In 2007 we introduced the Integrated Ticket, used by more and more passengers; in the last couple of years their number increased by 20%. Today the metropolitan transport system covers 33 communes. In 2014 Warsaw together with 39 communes concluded a metropolitan cooperation agreement, which now serves as the basis for cooperation on key issues related to economic and social growth of our local communities. An important element in building cooperation is the special pool of EU funds under the Integrated Territorial Investments instrument, under which projects which support low-emission transport, education, and economic development are being implemented.