#GreaterWarsawWorks – As part of the Integrated Territorial Investments in Greater Warsaw, local authorities have signed agreements for EU funding worth over PLN 320 million. This money will help i.a. provide additional places in nursery schools, bike paths, and P&R facilities.

“We concluded agreements concerning 45 projects with a co-funding amount of PLN 320.8 million implemented individually by communes, in commune partnerships, in partnership with Warsaw authorities and by thriving NGOs and private enterprises operating in the area of Greater Warsaw,” said Michał Olszewski, Deputy Mayor of Warsaw. “All the activities revolve around one thing: the partnership arising from the covenant of 40 communes signed in February 2014 and common investment strategy,” he added.

Investments of Warsaw and 39 communes around Warsaw are implemented thanks to European funds worth over EUR 165 million from the 2014-2020 Mazowieckie Voivodeship Regional Operational Programme as part of the Integrated Territorial Investments instrument. This special pool of European money helps local governments of Greater Warsaw shape vital aspects of life, such as public transport, education, and economic development. These funds enable closer cooperation between Warsaw and the agglomeration’s communes utilising their potential and assets to the fullest.

Video footage from the press conference:

There are currently 12 projects contracted, thanks to which a cycle-path network will be expanded in Warsaw and in the area of the surrounding communes. Local governments will receive over PLN 230 million in co-funding from European funds for that purpose. As many as 327 km of bike paths are due to be built by 2018 as part of these projects. Agreements have been already signed by Warsaw; Grodzisk Mazowiecki, Michałowice, Żyrardów, Milanówek, Podkowa Leśna, Pruszków (PLN 29.8 million in funding); Marki, Ząbki, Zielonka, Kobyłka (PLN 23.6 million); Błonie (PLN 5.1 million); Legionowo, Czosnów, Jabłonna, Łomianki, Nieporęt, Nowy Dwór Mazowiecki, Radzymin, Wieliszew (PLN 48 million); Józefów, Halinów, Karczew, Otwock, Sulejówek, Wiązowna (PLN 26.5 million); Nadarzyn (PLN 4.5 million); Izabelin (PLN 4.2 million); Piastów (PLN 2.9 million); Jaktorów (PLN 3.9 million); and Raszyn (PLN 5.4 million). 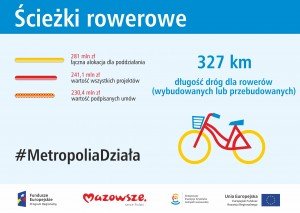 Warsaw will get 71.6 million out of the pool (the total investment cost is PLN 110 million). The money will be spent on the construction of 19 bike paths with a total length of 73.4 km, out of which 59.8 km are new routes built for bicycle traffic, 13 km of redeveloped existing paths, and the remaining 0.6 km of paths marked out within the existing infrastructure. Thanks to the ITI, in this and the following year in Warsaw paths will be created along the following streets: Towarowa, Okopowa, Żwirki i Wigury, Powsińska, Wiertnicza, Połczyńska, Kasprzaka, Jagiellońska, Puławska, and Jerozolimskie Ave.

The Greater Warsaw bike path network creates transport corridors integrated with various types of public transport. This will serve as an alternative for residents commuting to work by car on a daily basis. Using the bicycle as a daily means of transport reduces air pollution and noise, at the same time improving road traffic safety. Paths built within the ITI will be uniformly marked.

13 projects were selected for implementation in the first call for proposals, thanks to which the network of Park & Ride facilities will be expanded. All the projects have been contracted, for which the envisaged EU co-financing amount is PLN 59.1 million. The planned investments include the construction of new or redeveloping the existing car parks in Warsaw (PLN 2.8 million in funding) and in communes neighbouring with the capital city: Marki (PLN 2.1 million); Leszno (PLN 544,000); Wołomin (PLN 800,000); Kobyłka (PLN 6,000,000); Legionowo (PLN 2.7 million); Radzymin (PLN 812,000); Podkowa Leśna (PLN 600,000); Ząbki (PLN 4.4 million); Żyrardów and Grodzisk Mazowiecki (PLN 19.2 million); Wieliszew (PLN 836,800), Jaktorów (PLN 2.9 million); Pruszków, Piastów and Michałowice (PLN 15.5 million). There will be a total of 23 facilities with 2711 parking spaces for passenger cars and 1133 for bikes. 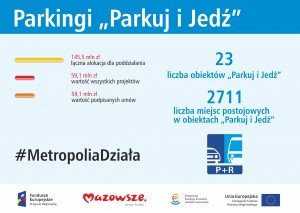 The vicinity of the planned car parks to collective transport stops will encourage residents to use public transport. Commuters will be able to park free of charge on the basis of a city transport ticket or a ticket issued by a local transport-service provider. P&R facilities located in communes around Warsaw will be marked in a uniform way – using the graphic design referring to car parks managed by the Public Transport Authority in Warsaw. All this is to make sure that the residents can easily distinguish between P&R facilities and other illegal or commercial car parks. The car park network will prove useful to the residents of the suburbs in their daily commuting to Warsaw and encourage people to use collective transport, as the main argument in favour of choosing specific investments was their coordination with urban transport. It should also be mentioned that any reduction in the number of cars on the streets contributes to a decrease in pollution and an improved operation of public transport. 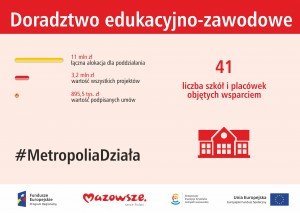 The amount of contracted EU co-financing within this activity is PLN 895.5 thousand, which means that 41 schools and institutions will receive support as part of projects. Two projects which are currently being implemented (“Chwytam zmianę (Grasping change)” and „Nauczycielu – daj sobie szansę (Teacher, give yourself a chance”). These are aimed at developing educational and vocational counselling and fostering cooperation with the job market, i.a. by improving or acquiring qualifications of teachers carrying out educational and occupational counselling, and creating School Information and Career Points. The funds are also being used to strengthen cooperation between schools and the job market by recognising the market’s needs and promoting vocational education.

Within this activity, the total contracted EU co-financing amounts to PLN 7.6 million, from which 7622 students and 511 teachers will benefit. The projects which are currently being implemented are aimed at shaping key competencies and creating proper attitudes/skills in children and teenagers, which they would later find necessary when entering the job market. These include competencies in the fields of: mathematics, natural sciences, IT, communicating in foreign languages, and attitudes/skills like: creativity, innovativeness, team work, and entrepreneurship. These assumptions will be possible to implement through additional compensatory educational classes, implementing new experimental teaching forms and curricula, and equipping schools and educational establishments with educational aids and ICT tools. 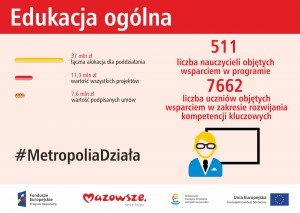 Projects will be implemented, i.a., in Warsaw, Błonie, Nadarzyn, and Kobyłka. One of the most advanced projects is “Education explained – support for students from the Błonie Commune by equalising their educational opportunities and the application of experiment-based teaching”. The measures provided for under the project include two primary schools in Błonie and the School Complex in Bieniewice with a primary school and a lower-secondary school. Under the project equipment was purchased for classrooms in two schools. The children can benefit from educational trips, and teachers – from training and post-graduate studies.

Day-care facilities for children under 3

Agreements have been signed for the co-financing of 9 projects worth PLN 22.6 million. Thanks to this, new places in day-care facilities for 933 children are due to be opened in Warsaw and the surrounding communes. Warsaw will receive over PLN 15 million for the co-financing of places for 700 children in nurseries in the Białołeka, Praga-Południe, and Żoliborz districts. Subsequent projects, this time implemented by private entities involve new places in Wola, Mokotów, Praga-Południe, Ursus and Bemowo districts. 100 new places for children will be provided in the area of Grod

zisk Mazowiecki, Wiązowna, and Piastów. The EU funds will be used to adapt rooms to the needs of children, to purchase and install equipment, purchase aids for in-school extracurricular activities and educational classes as well as training and remuneration for the personnel and ongoing operations of the establishments.